The Texas based synth wave duo "Night Drive" hit the scene a few months ago. The band, composed of Brandon Duhon and Rodney Connell, has become one of our favorite groups! They're excellent in regards to their vocals, and solid in regards to their sound as well. 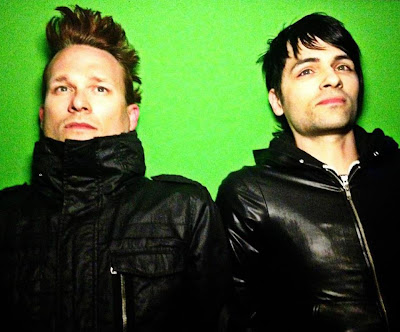 1) How on Earth did Night Drive start?
We both knew of one another but were actually rivals over the same girl. She died in a car crash, which is terrible, but we became friends because of it. The band name is an attempt to sum up the strangeness of that whole scenario.

2) What would your top 3 greatest musical influences be?
LCD Soundsystem, New Order, and Cut Copy!

3) If you (as a band) had to pick your favorite song, what would it be?
Well that's impossible, but let's go with Messages by OMD, no wait, Girls & Boys by Blur.
4) for Rodney: All time favorite favorite pizza?
edamame asian-style

6) as a band, where do you guys envision yourselves 5 years from now?
Probably touring overseas, hopefully in your area of the world if possible.

7) Advice for newer synth artists?
Strike a good balance between taking it seriously and enjoying yourself. It also really helps to be working with people who are musically inspiring to you.

8) Any new singles coming out? Whats the deal with albums?
New single "Sea of Light" coming out August 13th and the EP coming out September 3rd.

Check out some of NightDrive's stuff here!