We caught up with Sally Shapiro earlier this month and decided to do a piece on the group! Both Johan and Sally are rather humble and down to Earth. Very nice people, and very quality artists. Check it out! 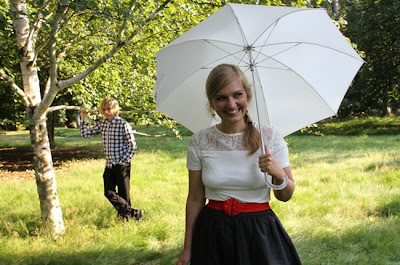 1) What got both of you into music? How and where did it start?

Johan - I've been into music, in one form or the other, as long as I can remember. I have tapes from when I was about six years old when I recorded songs from the radio, from the TV, or from myself singing or trying to play the piano. I got into electronic music at age 10 and started to save money for a keyboard, that I bought a few years after. Since then I have been making electronic music and on a "serious" level, with the aim to release it, since 2004.

Sally - I sang a lot as a child and was a big fan of the Eurovision Song Contest. I never aimed to do anything serious though before Johan asked me to sing on our first track as Sally Shapiro, "I'll Be By Your Side".

2) Where do your individual inspirations lie? Any artists in particular from a different time period?

Johan - It started with a big inspiration from the "dance romantic" sub-genre of Italo Disco from 1984 with artists like Valerie Dore, Katy Gray, and Savage. But nowadays I'm taking inspiration from lots of genres, like IDM, trance, neo-classical, jazz, etc.

Sally - Mylène Farmer is a big inspiration for the Sally Shapiro project for me.

3) What is the greatest challenge Sally Shapiro has had on its way up in the music industry?

"The greatest challenge was getting away with not making any live appearances. This has been troublesome for people in the music industry we have worked with (or tried to work with). But nowadays everyone knows it so it's not really a problem anymore, except that we probably sell less records because of it."

4) If there is one thing you could change in the industry, only one, what would it be?

The focus on albums still remains among record labels, reviewers, publications. It's like everyone is talking about the death of the album and then they give us 50 album reviews and 0 track reviews.

5) Is Sally Shapiro a full-time job or do both of you have other interests as well?

It's a hobby or an extra job. We both have normal lives apart from it. Johan spends some time with the business/promotion side of it, but Sally doesn't exist as Sally Shapiro between the hours in the studio, except for some occasional photo shoots and interviews. Our friends come from other places than the music industry, we don't really feel like being part of any scene or something like that.

6) (For Johan only) All time favorite food?

7) (For Shapiro) All time favorite Dessert?

Nothing that's official. We're not completely inactive though


9) (For Johan) Any advice for newer nu disco/80s synth artists?

It's a difficult question to answer in a way that doesn't sound like too cliché. Be passionate about what you're doing. The day when the passion is gone, do something else until you find it again.