We were swept off our feet a while back when we heard Keljet's edit of "Love" by Noosa.We had no choice but to somehow find out more about this mysterious nu-disco group, which is why we decided to go to their Facebook, and read their description. It read,

"Keljet is the Indie-Disco collaboration between Koen Mestrum and Teun Pranger. Since as early as 2010, the Nijmegen based Dutchmen have been flooding the blogosphere with their remixes and original productions. Harvesting support by many dj’s and producers such as The Knocks, Goldroom, Zimmer and Don Diablo."

However, we felt this wasn't quite cutting it for us. We still wanted to know more about Keljet, and so we decided it was time for a Saturday Sitdown. 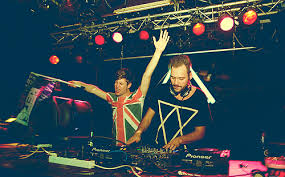 1) How did Keljet start? Who are the people behind the group?

We are Teun Pranger and Koen Mestrum and we actually know each other from high school over here in the Netherlands. Back then we had quite a different musical taste, as Teun was more into house music and Koen more into rock, but later on we both started liking more and more different types of music and at one moment Teun asked me if I wanted to make some music together. He was already producing house music for some time, while I had played in different (short-term) bands.

At first we made really shitty loud music, but at some point we found a style we felt confident about and was a mix of all kinds of different genres we liked. And that’s how we got started as Keljet!

2) What inspirations do you have regarding your sound- what artists have influenced your tracks?

We both like a lot of different sorts of music. I think that we use them all as an influence to our own music, although the most obvious styles you’ll hear back are nu-disco, house, indie and pop (not the cheesy type). There’s lots of different artists that influence us, so it’s quite hard to name just a couple, but you gotta thinkThe Magician, Yuksek, Alex Metric, Chromeo, Miami Horror, Bag Raiders and more like that!

3) What is your favorite pizza topping?

Koen: Gotta agree on that!

Koen: Into The Wild


5) Tell us about any new EPs or albums in progress. Are there any new tracks or remixes around the corner?

We’re currently working on a EP with about four original tracks. We have a couple of demos done and working on some more which we’re looking to get some cool vocals on. At the same time we’ve been quite busy working on new remixes. Got a couple of remixes coming that we’re really excited about, but unfortunately we can’t really say anything about that yet!

6) Aside music, what do the people behind Keljet do for fun?

We like drinking beer and playing Mario Kart on the Gamecube haha.

7) Any advice you have for your fans?

Play out our music very loud! And dance to it! And if you want us to play in your favorite club, tell the promotor to get in touch with us because we would love to party with you all!
Posted by Unknown at 05:12