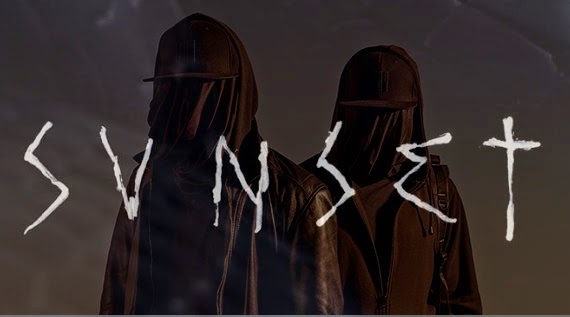 The novelty of mystery has often created some of the most interesting and enthralling musicians in the past. Off hand one can think of the likes of Daft Punk who have perfected the use of a separation from their everyday selves to stretch the boundaries of their creative process while at the same time giving a greater focus on the content over personality. It is with this frame that I bring up the ever mysterious Franck Rivoire. Known under the pseudonym "Danger", Franck has managed to emulate, if not perfect this mystery. With a mixture of illustrations, videos, and a unique sound, Danger went above and beyond simply 'making music' and created something which transcended genre. Now, Frank is partnering up with the higly conceptual and talented Parisian artist Raphaël Siboni on a new project titled "SUNSET". We had the pleasure to sit down with Franck and Raphaël to discuss their new project, art, and music in general.

How did you two come to work together? What made this project happen?

Raphaël. I first met Franck and work with him when I created “Last Manoeuvres in the Dark”, an art installation at the Palais de Tokyo in 2008.

Franck. Then we designed the new Danger Live in 2010 for the opening of Gaité Lyrique in Paris. After endless nights speaking about electronic music, cinema and contemporary art we decided to start our own project, SUNSET - at the cross of all these disciplines.

What themes and emotions does your EP try to convey? What is the story it is telling?

R. Our first EP is about Love and Death. How Love fights Death. And how Death eventually crushes Love. SUNSET is an epic chivalery romance from the XXI century. The joust takes place in Miami Beach, surrounded by girls in fluoresecent bikinis under Red Bull hallucinations.

F. We started SUNSET during Springbreak 2012 in Miami. There was a dark storm during the Ultra Music Festival. We could hear Trance anthems from afar. And then Raphael’s French voice came over it. This is how SUNSET began.

Can you talk about how each of your creative visions contributed to the EP?

R. I’m not a musician. I don’t know anything about it. To me electronic music is a raw material, as a block of marble, the flickering of a strobe light or the last episode of a bad reality tv show. I write lyrics from the post-internet apocalypse. And I want to make the girls cry - teared down by the beauty of our collapsing world.

F. Each step of the musical and visual productions are discussed together, from the composition to the mastering, from the storyboard to the music videos direction. Raphael write the lyrics. I’m more focused on the musical aspect. But there is a constant feedback loop between us.

What artistic direction are you trying to go in with SUNSET? and what genre would you consider SUNSET's music?

R. SUNSET doesn’t belong to any existing genre. It is just poetry on top of electronic music. Some could say EPM - for Electro Poetry Music. To me, clubs are the cathedrals of our days. This is where the poets should stand - amongst synthetic drugs and 40Hertz sub-basses.

F. I mix all the EDM vocabulary people are used to hear in clubs - I’m talking about Drops, Fill ups… -  with unusual melodies, structures, tempos and elements. The song’s structures are primilary created to follow the lyrics, as a rythmic OST. Something that remind the club, but without being a real club song.

What are both of your top tracks at the moment?

What are both of your all time favorite horror movies?

R. The Fog, John Carpenter - It reminds me from the smoke machines in the club’s darkness.


From your unique perspective as French artists, how do you view the rise of so called "EDM" music in North America?

R. EDM is like a pink glittery double bacon burger with cheese. It is like a slow-motion lamborghini car crash on a concrete highway at dawn. A low fat high protein sugar free energy drink for your soul. This is why EDM has risen in the US.

F. I think EDM always existed since electronic music rose in the 90’s. US has been the birthplace of the first underground electronic music scene, but it first exploded in Europe. Now EDM is back and at its peak in the US - A Michael Bay blockbuster’s version of the Eurodance legacy.

What can we expect from both of you individually and as SUNSET in the near future?

F. Coming next on 1789 records there’s a new Danger release, and then a new single with SUNSET.

R. I’m going to Svalbard’s Archipelago in the artic ocean at the end of February. I need to be alone when I write lyrics. Hopefully new EDM anthems will rise from the depth of the polar night.