Disco Unchained Interviews (We Are) Nexus 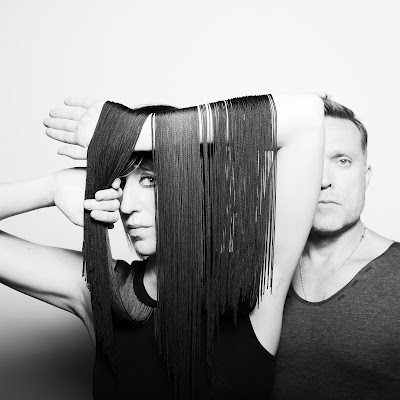 (We Are) Nexus is an interesting act to say the least. While definitely appealing to the electronic music crowd, it is fair to say that Nexus do not necessarily fit in to the 'EDM' box. Reminiscent of 90's house with soothing vocals and melodic themes, Nexus gives the listener a sense of nostalgia all the while pushing new and unexplored musical frontiers.We sat down with them and discussed a range of different topics.

How did you two start working together? Creatively speaking how would you say you complement each other as musicians?

Carmen and I met five years ago in Santa Barbara and we eventually formed (We Are) Nexus about three years ago. We released our first single (It Feels So Good) almost two years ago now - wow, time flies!

It was natural really, it was all about timing for us more than anything. Our paths crossed at a time when we were both looking for something like this, something to completely immerse and lose ourselves in. Carmen had the vocal and lyric writing chops and Nick the songwriting and production skill. When we put those two things together it was explosive and created an amazing and energizing partnership. We also get along incredibly well and see eye to eye on almost everything. That alone has to be the best thing that compliments us.

How would you describe your sound and to what sound would you say you are striving for?

Adventurous, risky, creative, passionate… Those are a few words that fit well, we think. Primarily, we want to be known for writing great music and as prolific artists. The whole DJ / tastemaker thing is cool but that’s not really what we want to be known for. Nick had a previous career as a World Music artist prior to (We Are) Nexus and the one thing he has always been vigilant about is how a music career looks after ten years. If you look back at ten years of your work and it’s chock full of tracks that sounded like everyone else’s hit at that moment time, it’s a pretty shallow reckoning. We want to able to look back at our music and be proud that we took risks, ignored trends, wrote from our hearts, and balanced it all with common sense.

Who would you say are your inspirations in the house music genealogy or music in general? (Both as Nexus and as Individual artists)

It’s hard for us to comment on house genealogy, we don’t consider ourselves tastemakers in that area, but there are definitely those artists in dance that have inspired us.  At the end of the day it’s the production that gets us. Let’s call a spade a spade, shall we! There’s no jam band, free-styling, or improvisation happening in dance; it’s all about the produced song and the well executed production of the song. We have been inspired by many of the great trance artists such as Armin, Above & Beyond, ATB, BT but that’s because we are big on top line and melody so we tend to gravitate towards the trance / dance side of things. Nick was classically trained at the Royal Academy of Music so we tend to like more in depth structure in music and composition. Our ears are always close to the ground listening to what new adventurous artists are doing such as Kygo, 3lau, Blasterjaxx etc….One of our new favs is Built By Titan. He’s relatively unknown, but that’s not going to last for long!

We love analyzing music markets so we definitely have an opinion on that! We love the trajectory Electronic Music has taken. It’s really quite amazing! It’s an interesting case study that we have heard discussed over and over again in the past few years.

The music business needed a powerful new genre to help redefine itself and give it a new trajectory. When you look at it from the outside, we think the success of Electronic Music ties into the rise of multimedia when dance hit the mainstream again through Lady Gaga. You can hand pick some Dance / Pop tracks that went big over the years but the glue that made it all stick this time was very different!

We really believe it was a timing thing. When Lady Gaga hit with “Let’s Dance” in 2008 (just when FB was first starting to blow up), it was the perfect recipe for a track that had its roots in Dance.  It struck a cord with the mass consciousness of the “to be” millennial kids who had never really heard something like that before; they wanted to share it and they now had the technological platform to do so.

The rise of multimedia, the up and coming millennial kids, and the existing dance community (that already shared freely) all seemed to ride in tandem at just the right time. You have all these Millennial kids super savvy on their devices, sharing content, not just music, everything! Dance blew up at just the right time, to the right crowd, and for the right reason! Rock and roll went through the same thing. It all has a deeper cultural influence and meaning on society at a time when music needed a new face.

This is a question we ask everyone we interview—what is your favorite horror movie?

Ooh no…Carmen doesn’t do horror movies - she’s a baby! lol She does like suspense, though. We just finished Season 1 of the Showtime series “Penny Dreadful.” Super creepy! Not a movie but that’s what we are addicted to right now.

do you have any pre-show rituals?

We do, yes.  Before each show we find a quite place to hold hands and we have a little mantra Carmen says that allows us to realize our best. It’s awesome and really helps us to focus!

What can we expect next from (We Are) Nexus?

We are really excited about our upcoming track “One More Shot.” We worked very hard to complete a track we think showcases both our vocals and production very well. You can expect killer remixes form Jose Nunez again as well as others. We don’t have a street date yet but expect it sometime mid summer. We are also getting ready to hit the road again around August on a tour which includes mainstream clubs, LGBT clubs and festivals!